Adam Fuss is best known for his contemporary photograms of moving light, live creatures, and organic things. British born and based in New York, where he began exhibiting in 1985 to immediate acclaim, he has created photograms in color as well as the black and white, silver gelatin print medium. His work is distinctive for its contemporary re-interpretation of photography’s earliest techniques, particularly the daguerreotype and the camera-less photogram. Fuss states that in order for any photographic technique to work, it should be personalized and transfigured into a greater metaphor, engaging processes that take place in the natural world. His work is usually compared to early 19th century “sun print” photograms rather than camera-less darkroom techniques that evolved under the influence of Bauhaus innovators in the early 20th century, however, technically, his darkroom photograms have more in common with Moholy-Nagy and Man Ray than William Henry Fox Talbot and Anna Atkins.

Fuss, trained as a commercial photographer prior to his art career, is heir to the visual culture and industrial-commercial photographic apparatus of the 20th century. His synthesis of a knowing, willful innocence and the visual syntax of industrial perfection has given his work its contemporary edge. His work is represented in American and International collections including the Metropolitan Museum of Art; the Museum of Modern Art; the Whitney Museum of American Art; the Los Angeles County Museum of Art; and the Victoria and Albert Museum, London. Fuss lives and works in New York City and has shown extensively internationally. 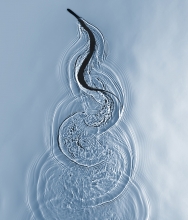